It is a common trope in science fiction, and the wider culture, that if you had a time machine, you could go back into the past and change something important. Killing Hitler, for example. This is a common idea and understandable: think of all the deaths that could be avoided if you were willing to take one life. Kill one evil man and save millions of innocents. (This trope has been on my mind, perhaps because of certain recent events which may have been influenced by this concept). 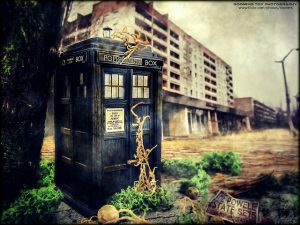 However, there is another trope in science fiction which says if you travel into the past and change something, then you create a new timeline and a new universe. It is linked to quantum mechanics and the many worlds theory first put forward by Hugh Everett.

However, the many worlds theory holds a paradox of its own. Because if the multiverse is infinite then all possible things exist, including all possible versions of the planet Earth and all possible timelines. So a universe where you travel back in time and kill Hitler already exists. There’s no need to actually do it.

Unless, of course, we are living in the universe where you travel back in time and kill Hitler – in which case, if you don’t do it, then you are messing with history and screwing up the timeline.

All I can say is – I’m glad it’s not me faced with that dilemma. You’re on your own. And best of luck with the whole time machine thing. Try Kickstarter. I’m sure you’ll get funding.