News this week of a new novella, a fourth book in the Koriba series (at last), and plans for future projects. 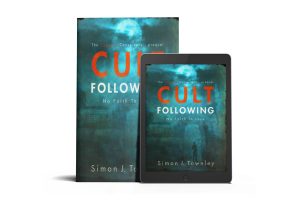 ‘Cult Following (No Faith To Lose)’ is a prequel novella to the ‘Capgras Conspiracy’ series. It introduces some of the key characters and fleshes out the backstory, but can be read on its own as a free-standing crime thriller.

There’s more here, or an Amazon. The book is Amazon and ebook only at present.

The second full-length novel in the series, ‘Cold Monsters (No Secrets To Conceal)‘ was launched last month with an appropriate stealth-release designed to throw the secret services off the scent.

Fans of my prehistoric adventure series ‘A Tribal Song – Tales of the Koriba’ will be pleased to hear that book four is finally on its way. The first draft of ‘Ancient Quarrel‘ is complete and the book should be ready to launch in the Autumn, fingers crossed. If you want to be the first to get a copy, I’ll send a free ebook version to the first person to correctly identify the source of the title. Let me know in the comments.

I have plenty of editing to do on the Koriba book, but my typing fingers are itching to get started on a fresh project, so I’m currently involved on lots of planning around a new novel and series. More news on that to come once the plans are a little more advanced: the truth is, I have four or five potential projects to pursue next, and haven’t yet decided which one to go with. One possibility, of course, is book 3 of the Capgras series. I already have a rough idea of the story, and the title is in place (which for me is half the battle), but story ideas are still percolating, and I might leave it a little longer before getting started on that book.

Finally, if you’ve read and enjoyed any of my books, I’d be immensely grateful if you would leave a review on Amazon or Goodreads or wherever you hang out – but Amazon most of all. It doesn’t need to be long or  detailed. Even a few words would help, and getting reviews is both harder and more useful than you might imagine.

Book trailer… an experiment
Cold Monsters live on Amazon, reduced price for a few days only