In a future ravaged by climate change, two brothers stow away on a tall ship headed for the melting arctic, searching for revenge, redemption, runaway parents – and priceless buried treasure. 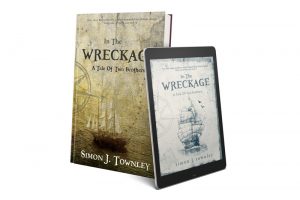 Abandoned by their parents, Conall and Faro Hawkins survive by their wits, stranded on Shetland as the world burns and the fuel runs dry – until one day The Arkady, last of the sailing ships, calls at the Scottish island.

The brothers stow away in the ship’s hold where they overhear the first mate plotting to steal the Captain’s treasure map. Genial rogue Jonah Argent intends to loot the mythical riches hidden by the ancients on the Svalbard archipelago.

As The Arkady sails for the melting arctic, can fifteen-year-old Conall find his parents, win the love of the captain’s daughter and rescue his older brother from his dreams of useless gold? Can he save the crew from slavers and the ship from jagged rocks – or salvage hope for a new world from the wreckage of the old?

A tale of sailings ships, treasure maps, treachery and savage seas. Action-packed adventure set in the debris of a scuppered world.

Buy print or ebook on Amazon

Buy in paperback direct from Createspace.