Now, go to the corner and don’t say another word until you’ve washed your mouth out 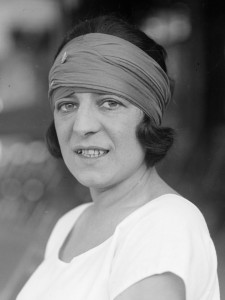 I see the world of tennis has decided to shoot itself in the foot. Again.

Some of the knuckle-draggers have lurched out of the locker room to demean the women’s game (this from a tournament CEO, in charge of promoting an event!) and complain about equal prize money (as if Novak Djokovic is short of a few bob.)

All of which flies around the world’s newspapers, websites and TV screens in the form of bad publicity. And no, that’s not a good thing. There are some professions where there truly is no such thing as bad publicity – rock or rap star, perhaps. Fiction writer for sure – those idiots need all the attention they can get. But tennis? Not so much.

All of this damages the game – and the irony is that tennis is the sport above all others where this argument should long ago have been put out with the garbage.

Because tennis, like no other sport, can boast of women champions, taken seriously, playing on the same stage as men going back not just decades but centuries. Literally. There are Wimbledon female champions up on the boards of the All England Club dating from the 1800s.

There are courts all around the world named after historic, revered women champions. Suzanne Lenglen, for example, who finished playing in 1926.

Are there golf clubs where the female winners are respected in this way? In most clubs, they’re still not allowed in the bar. Can football or cricket, rugby, athletics or any other sport claim to have champions the likes of Lenglen?

When we think of the true greats of the modern game, we don’t just talk about Federer and Nadal. I’d put Navratilova above all of them. And you could make a case for Graf and King and many others. And, of course, Serena. Great players, great ambassadors for the game, global celebrities.

This is unique. No other sport comes close. Many have introduced women’s codes in recent decades, which is to be supported and applauded, but they are all Johnny-come-latelys compared to tennis.

Only the Olympics treats women’s competitions as equal in the same kind of way. (A gold medal is a gold medal). Tennis, the Olympics. Not bad company to keep. Tennis should be shouting this from the rooftops. This should be the core of the marketing campaigns. Why are the slams so special? It’s not just history or five sets. It’s because both halves of the game come together for the big event. The women are there alongside the men. That’s what makes it the great spectacle. Gives it glamour. No other sport can offer anything like it.

This is, I will say it again, unique. A very strong selling point.

So what does tennis do? It shoots itself in the foot. Again.

The people who run and play the game, the ones who carp and complain about the women and their equal prize money, they need to get out of their executive lounges and their protected players areas and take a walk around the grounds sometime – especially at the slams. What they will see is men and women, in roughly equal numbers, side by side, and very often hand in hand. Courting couples. Married couples. Families. Father and mothers bringing their sons and daughters. And they can do so because there is plenty for all to see. And parents who truly love their daughters want to encourage them to go far in life and follow their dreams. Seeing women compete on an equal stage and footing is a phenomenal example for young girls to be shown.

No one involved in professional tennis should underestimate the importance of the women’s game. It is what makes the sport special. It could even be argued that it makes it more important than just another game because it sets an example which could help to improve our societies. Equality is essential, for all.

When male players whinge about how they are losing out because women get equal prize money, they lose sight of the bigger picture. A rising tide lifts all boats. If you want more prize money, promote the whole sport. Build tennis. Stop turning people away by spouting attitudes that belong in prehistory.

And these sexist comments do damage the game. Not only its reputation but visitors numbers too. Viewing figures. If the daughters and mothers turn away and don’t want to watch the sexist pigs compete, then the fathers could still bring their sons. But they’re more likely to take them fishing or to the football. The whole point of the tennis was that it was a family thing. Everyone likes that sport. Or they did, before you started insulting and demeaning half the human race.

You want to know how to improve tennis? Add more tournaments featuring both the men and women. Simple as that. I could go on, elaborate at length (I know, you guessed that much…) but for once there really is no need. Bring the two halves of the game closer together. Promote equality. There, your development plan for the next decade. Thank me later. Pay me now.

So, tennis, get a grip, get a life, join the 21st century. And if you want to develop your sport and win more fans, stop talking down half of your audience. Tell the multi-millionaires to stop whining about prize money percentages. (Really, that’s not a good look!) Start, instead, to promote your unique selling point. That’s men and women, taken seriously, equal. No other sport can come close. None will ever match the history. Women could play grand slam tennis before they could vote. You want to turn the clock back on that? If you do, then it’s time to get your head out of the gym locker and go learn about life, yourself and the world around you.

Tennis – you’re better than that. Show a little class.

Oh, and remember, when you insult, degrade and demean women, it’s your wives, girlfriends, mothers, grandmothers, daughters and granddaughters you are talking about. Is that really what you think of them?

Tahlia Newland tells us about her latest novel
Vampires and zombies, hackers and humans – why can’t they all just ‘get along’?