Fiction isn’t merely entertainment. Stories give us ways to better understand the world. And ourselves. 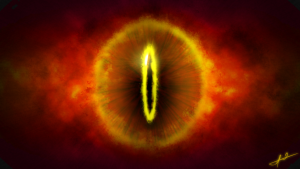 The all-seeing eye of the NSA.
Image by Selrond on Deviantart: http://selrond.deviantart.com/art/Sauron-s-eye-410597000

Take JRR Tolkien’s fantasy classic The Lord of the Rings. The ring of power symbolises… power, plain and simple.

Some people have tried to stretch the analogy, saying is symbolises the power of atomic weapons.

I disagree. I think it represents all power.

In the book (and the movies) Frodo offers the ring for safe keeping to both Gandalf and Galadriel. Both are tempted, both refuse for the same reason. They know the power of the ring would change them. It would make them evil, turn them into their enemy, into the very thing they are fighting against. Because you can’t use evil to defeat evil. It’ll turn you to the dark side. (Or is that from a different tale?)

I see important lessons for the people who run, fund, support and agree with the work of the NSA and GCHQ.

They have at their disposal immense power. And they have chosen to grasp it, to seize it and to use it. Because they can.

This was a mistake, but they can’t see it, because they’ve become blinded by their own power. They are controlled by it.

We could try to help these people, to show them how and where they have gone wrong. But it’s an uphill task. Because – and here’s the irony – despite their obsession with surveillance, they are actually not very good listeners.

New book launch: ‘In The Wreckage’
Me and my girl