My latest novel, In The Wreckage (A Tale of Two Brothers), has now been published – in ebook form only at present, but with a paper edition in the pipeline. The ebook will be exclusive to Amazon for three months.

In The Wreckage is aimed at every age range from Middle Grade (10+) to adult. It’s set in a nearish future where climate change has caused the collapse of civilisation, overheating and drought across most of the globe, making the ice caps melt. For decades refugees have been fleeing to the melting arctic. The stream of refugees slowed, however, as the world ran out of fuel and ships. 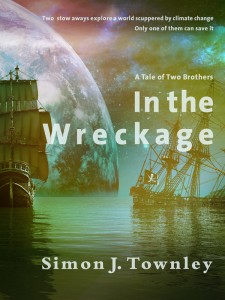 The book follows the adventures of Conall Hawkins, one of two brothers abandoned on the Scottish island of Shetland while fleeing towards the arctic. The boys grow up as feral kids, living by their wits, grudgingly tolerated by the locals. They are trapped here, as no ships call at Shetland any more, and the island has become becalmed, neglected and forgotten.

The book begins when Conall, fifteen, sees a sail on the horizon. When The Arkady, the last of the sail ships, calls at Lerwick, the capital of Shetland, Conall and his brother Faro sneak on board as stow aways, hoping to reach the Svalbard archipelago and so find their missing parents.

The book is a cross between dystopian sci-fi and boys-own adventure tales such as Treasure Island and Kidnapped, designed to appeal to young adults and adults alike. You can read the book blurb here.

You can find links to a range of Amazon stores worldwide here.

The book is ‘scheduled’ for release in paper format later in 2014.