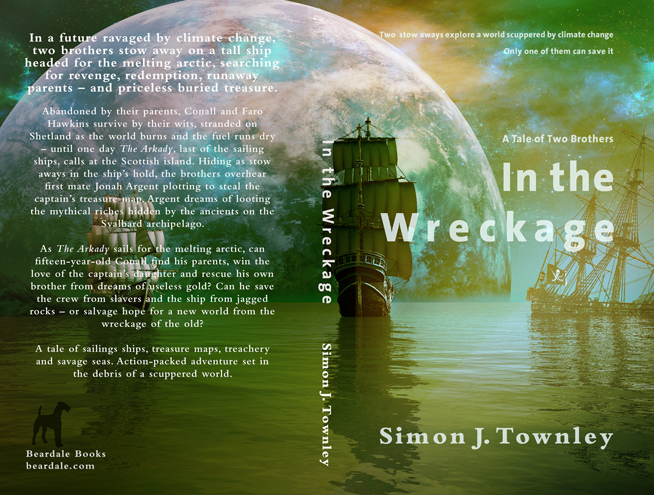 In The Wreckage (A Tale of Two Brothers)

‘In The Wreckage‘  (a post-climate-change dystopian apocalyptic sailing ship adventure tale) is now available in print editions. The story follows the journey of Conall and Faro Hawkins as they escape Shetland and head for the melting arctic looking for the parents who abandoned them on the Scottish island many years before.

The voyage, as stow aways on a sailing ship, takes them up the west coast of Norway, into Russia for a while, and on towards the Svalbard Archipelago and the island of Spitsbergen.

It’s got a “Treasure Island meets The Drowned World” feel about it, with  a dollop of Kidnapped thrown in for good measure.

The paperback version is available to buy directly from the print on demand providers here. (Buying direct means more money for the author, by the way, and less for the middle men).

It’s also available through Amazon in the US and in the UK.

Climate change fiction, by the way, is now being referred to as ‘cli-fi’ in some circles – but I’m not convinced it will ever catch on.