‘Mimesis,’ the idea that stories act as a mirror to the truth, drives fiction. When done well, it sets the great books apart from the also rans – whether or not writers and readers know it about consciously. Because it’s what brings the tale to life. And what makes it linger in the memory. 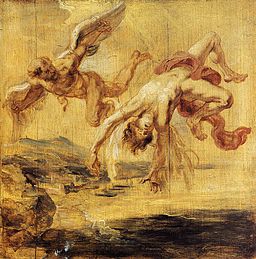 Rubens – The Fall of Icarus

Why do we read and watch fiction, stories that have been made up, that simply aren’t true? For many reasons. For entertainment, of course. But also to learn. One theory of how story works is that the hero or central character has a problem to solve, and we the readers share in his challenge, we face the dangers and conflicts with him, or her, and by doing so we learn valuable lessons, which we can use in our own lives.

But surely we never have to fight dragons, or slay zombies, or catch criminals? We may be happily married, and don’t need to snag a lover or attract a spouse.

The point is that we still learn deep truths about life from fiction. Often it’s easier to see the truth when it’s presented in the form of a story, even if that story may itself contain huge exaggerations.

Take George Orwell’s 1984 as an example. The book is famous for showing how the state would come to spy on its own people. It’s a terrifying, dystopian vision. But much of the violence and cruelty of the state shown in the book has never come to pass, even though, in this day and age, there is arguably much more surveillance of our lives taking place than Orwell could ever have envisaged. By exaggerating, Orwell was able to create a picture in our minds which was both powerful and memorable. And most importantly of all, it rang true. Even though it wasn’t ‘true’ in any strict sense. The people were made up. The incidents never happened.

Often the reason books become popular is because they show us, by reflection, an image of the truth that is more powerful than the mere facts of the case.

Take ‘The Hunger Games’ as another example. It’s not about our world. It’s about some future dystopian world, unlike ours in many ways. But the book is clearly and deliberately drawing parallels. For one thing, it makes us look at reality television in a very different light. It helps us to see the world anew.

Which brings us to ‘mimesis.’ This is a literary term that comes from the ancient Greeks. It means ‘holding a mirror up to nature’ – and it lies at the heart of most art, be it novels or painting or sculpture or movies.

Because when you fall in love with a particular book or story or set of characters, it’s likely that you’ve seen or felt something that for you really rang true.

But to understand mimesis, what it is and how it works, we need a little history. Time to head back to ancient Athens.

Let’s get philosophical – Plato and Aristotle duke it out

Athenian philosopher Plato wrote a (non-fiction!) book called ‘The Republic’ in which he envisaged the perfect city state. In it, he exiled the ‘poets’ (by which he meant all story-tellers) – he sent them to live outside the city walls as undesirables. Why? Because they are liars. They don’t tell the truth. They just make it up. The literature and plays produced by these poets, he said, is a mere ‘shadow of the truth.’ It was subjective and emotional, not rational. And that would lead to bad decisions and bad living.

But Aristotle saw things differently and took Plato to task. In his book ‘The Poetics’Aristotle claimed that because art is made up, it can be fashioned and moulded to show truth more clearly than, say, the accidents of history. Made up art reveals higher truths, he said. It holds a mirror to reality.

The idea has resonated throughout the history of literature and fiction writing, the movies and the arts in general. Not everyone likes the idea – plenty of great writers among them (Bertolt Brecht for one).

Some of the very greatest writers, Shakespeare for one, have played with the idea repeatedly. Hamlet urges the actors visiting Elsinore to ‘hold as ’twere the mirror up to nature’ – with the intention of getting at the truth about how his father died.

And there as many ways to use the idea of a ‘mirror to nature’ as there are writers. Some seem determined to cudgel their poor readers over the head with their insights. Others can be more subtle, or might even reflect truth almost as an afterthought, or an accident, or something that oozes out of their unconscious as they dream their tales into existence.

Don’t fly into the sun, or stare at it …

You could argue that it would be hard to write any story with no element of mimesis – because all characterisation tells us something about the way people are, how they behave, the things they do. And a tale with no characters and no action isn’t a story at all.

But when writers set out with that towering ambition to reflect the truth, like Daedalus and Icarus flying to the sun, there’s a danger they’ll come crashing back to Earth with a bang. All the same, there’s something glorious in the attempt. And Icarus’s story lives on, precisely because it has something useful to tell us.

Often the stories that move us the most, that live longest in the imagination, that catch fire and even become a living part of our culture and our ideas – Orwell’s ‘1984’ for example – do so in part because they held up a mirror to nature and revealed something true, even while telling a fiction.

The events and the people are not real. But they reveal reality, throw it into a stark contrast. Or allow us to look at the truth in ways that otherwise might not be possible.

Like watching the progress of a solar eclipse projected onto a sheet of paper, because you know that if you look at it directly, it will burn out your eyes.