Review: ‘The Wisdom of Insecurity’ by Alan Watts

‘The Wisdom of Insecurity‘ is a subtly powerful and intriguing book. It weaves together science, religion, philosophy, psychology and cultural analysis, but does it in ways that always feel directly relevant to the way we live. This is not writing for the sake of being clever. It’s there to change us. To make us wake up and smell the cortisol. 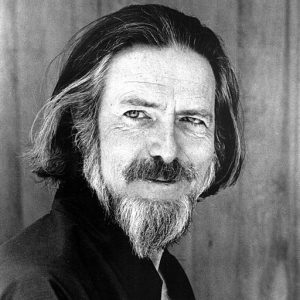 Watts, who died in 1973, was a British philosopher, writer, and speaker, best known as an interpreter and populariser of Eastern philosophy for a Western audience. From 1950 he taught at the American Academy of Asian Studies in California and gave regular talks on buddhism in general, zen in particular, psychology and philosophy and plenty else besides both in lectures for his students and on a radio show for Pacifica Radio in Berkeley. He wrote more than 25 books. ‘The Wisdom of Insecurity’ is, for me, among the very best of them. It is subtitled ‘A Message For An Age Of Anxiety’ – and while he was writing about his own time, all of sixty-five years ago, the messages within are undoubtedly even more powerful, more relevant and more needed than ever before.

“We seem to be like flies caught in honey. Because life is sweet we do not want to give it up, and yet the more we become involved in it, the more we are trapped”

Have you noticed how everyone seems anxious all the time? It didn’t use to be as bad as this. I know I’m not alone in noticing, because a neighbour of mine, a chap in his sixties or so, commented on it the other day. And we don’t live in a hotbed of anxiety. Life can be quite slow and peaceful in a Devon village, even during tourist season.

If you’re in your teens or twenties, you might think life has always been this anxiety producing, but I can assure you things have got exponentially worse in recent times. Why? That’s a debate for another time (which is to say, I have no real idea, though I’m pretty sure technology has something to do with it. I don’t think it’s the threat of terrorism or even climate change, because for all their seriousness and importance, they are certainly no worse than the threat of the Cold War and nuclear attack which were so prevalent in earlier times). 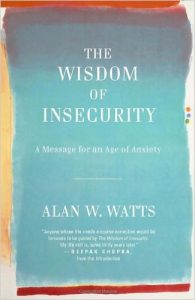 Watts says much of the anxiety in our societies come from the breakdown of old traditions:

“traditions of family and social life, of government, of the economic order, and of religious belief. ”

But Watts also provides far more fundamental and far reaching reasons for the anxiety so many people feel – and brings it back to ourselves. We must face what we are doing to ourselves, he tells us. The problems and the answers lie within. In chapter four, ‘The Wisdom of the Body,’ he describes ’the European dissociation’ – a condition which is, he says, not unique to American-European civilisation, but characteristic of it. It comes about because: “we have been taught to neglect, despise, and violate our bodies, and to put all faith in our brains. ”

Our consciousness carries much of the blame. It comes from an ability to think about and plan for the future – but that brings with it the ability to fear pain and death. It would appear to be, therefore, part of the human condition.

“We seem to be like flies caught in honey. Because life is sweet we do not want to give it up, and yet the more we become involved in it, the more we are trapped, limited, and frustrated. ”

He tells us much of the anxiety comes from a fear of change in general, and death in particular. That fear, he assures us, is misplaced:

“Life and death are not two opposed forces; they are simply two ways of looking at the same force, for the movement of change is as much the builder as the destroyer. The human body lives because it is a complex of motions, of circulation, respiration, and digestion. To resist change, to try to cling to life, is therefore like holding your breath: if you persist you kill yourself.”

Watts is lucid and convincing when he writes about the problems we face. Of course, it is more difficult to provide solutions. Watts does not disappoint – there is a way forward.

“How are we to heal the split between “I” and “me,” the brain and the body, man and nature, and bring all the vicious circles which it produces to an end? How are we to experience life as something other than a honey trap in which we are the struggling flies? How are we to find security and peace of mind in a world whose very nature is insecurity, impermanence, and unceasing change? All these questions demand a method and a course of action. At the same time, all of them show that the problem has not been understood. We do not need action—yet. We need more light.

Light, here, means awareness—to be aware of life, of experience as it is at this moment, without any judgments or ideas about it. In other words, you have to see and feel what you are experiencing as it is, and not as it is named. This very simple “opening of the eyes” brings about the most extraordinary transformation of understanding and living, and shows that many of our most baffling problems are pure illusion.”

Watts is always worth reading for the ideas and the warm wisdom alone. But his books are also a joy to read. There is nothing here of the dry academic, with one eye on his back-stabbing colleagues and the other on his professional peers, not giving two hoots about the poor reader. Instead, Watts writes with clarity, wit, vigour and a tough, straight-forward style. The clarity he achieves is remarkable considering much of what he writes about must be classified as either philosophy or comparative religion, with generous helpings of science and psychology thrown in. He was no self-help guru. He never spouts truisms or nonsense. He is a tough thinker, but one with a typically British self-deprecating sense of humour.

It is a real shame he isn’t still with us, because the world needs this kind of wisdom more than ever:

“Civilization is ready to fly apart by sheer centrifugal force. In such a predicament the self-conscious type of religion to which we have so long been accustomed is no cure, but part of the disease. If scientific thought has weakened its power we need have no regrets, for the “God” to which it could have brought us was not the unknown Reality which the name signifies, but only a projection of ourselves—a cosmic, discarnate “I” lording it over the universe.”

As well as writing beautifully, and with power, Watts is also brilliant at producing the right quote to sum things up and add a flourish:

“Eddington, the physicist, is nearest to the mystics, not in his airier flights of fancy, but when he says quite simply, “Something unknown is doing we don’t know what.”

Verdict: If you’re even remotely interested in life, the universe and everything, then this book is a treasure. It might just change your life.