…in which the debate over who first came up with the idea of a ‘school for wizards and witches’ is finally put to bed, once and for all!

Of late, on the interwebs, there has been yet more debate among writers and readers  about who  first came up with the idea of a school or university  for witches and wizards.

JK Rowling’s Hogwarts is the best known wizarding school, of course. But she wasn’t the first to use such an idea. Before her there was Terry Pratchett and his discworld series, featuring the Unseen University (where wizards learn their trade), and a young witch who attends a school of witchcraft.

And before that there was Ursula K. LeGuin and her Earthsea saga, with its school for wizards on the island of Roke. The first book in the series was published in 1968 – long before Pratchett and Rowling.

So was she the first? No. People have identified similar examples dating back to the early twentieth century. And I can push the date back even further. Much further. And I can reveal what I believe is the first ever written mention of such a school …(drumroll please)…

…but first, a little history. Where do we get our myths and stories and images of wizards and witches? From the  ancient ‘celtic’ druids.

Or rather – because we know so little about the druids – we get the popular image of a wizard from  fanciful depictions of them made by enthusiasts in the seventeenth, eighteenth and nineteenth centuries. 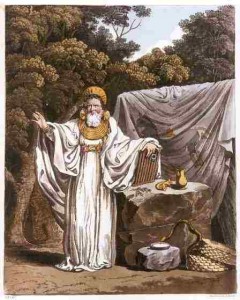 In his book ‘Druids: A Very Short Introduction,’ Barry Cunliffe includes several illustrations to show how the craze for celts and druids led to fantastical creations and embellishments, which have persisted to this day.

Writing about the second of these shown here, (an aquatint by S. R. Meyrick and C. H. Smith, published in 1815) Cunliffe writes:

‘An Archdruid in his Judicial Habit’ … was a work of fiction but incorporated depictions of real artefacts of differing dates. It was influential in creating the vision of the Druid popular in the public imagination from the 19th century to the present time

Do these images seem familiar? Think Gandalf, Getafix, Dumbledore and the rest, from flowing robes to big bushy beard.

Many of our ideas about wizards and witches come from the druids – about whom we actually know very little, because they left no written records. Most of what we do know comes from Greek and Roman writers, some of whom explored Gaul and ancient Briton. While others simply invaded.

Which brings us neatly (and finally!) to the revelation. The first written reference to a school of wizards comes from none other than … Julius Caesar himself.

Did he write children’s books or fantasy? No. But he did write a history of his conquest of Gaul, and in it he says this:

“It is said that the druidic movement began in Britain and was then carried across to Gaul. Even today, those who wish to study their teachings most diligently usually travel to Britain.”

“The Druids are exempt from military service and do not pay taxes like the rest. Such significant privileges attract many students, some of whom come of their own accord to be taught while others are sent by priests and relatives.”

Caesar tells how the druids “give instruction to their pupils” on the knowledge of the heavens, and says some will spend as long as twenty years in training, memorising verses.

Bingo. Not a fictional school of wizards, but a real one. The druids in Britain (just like the universities today) were doing a roaring trade in training  apprentices from across the continent.

All of which makes sense. Today we have schools that train people in the things our culture values most highly. In some schools that might be maths and physics and engineering. In others, even today, you might learn religious instruction. I’m no Catholic, but I’m sure priests have to go to a school or seminary  and learn how to carry out strange rituals – involving the transformation of a wafer of bread and a glass of wine into the blood and body of a god.

To an outsider, that looks a lot like magic.

The druids trained their young people in their beliefs and rituals. They almost certainly had some kind of institution doing this in pre-Roman Britain. That’s what Caesar implies.

So if anyone is going to knock JK Rowling for using the idea, it should be him. He was the first – to write it down at least. But he’s probably left it a bit late to stake his claim to copyright. And besides, he didn’t invent the idea. The druids did that. Or was it someone else, even further back? Who knows when?

Ball Machine nominated for an award
"Lean, terse sentences move this tale along at a blistering pace."