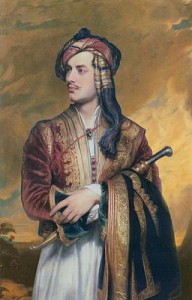 First of all, apologies for the sweeping generalisations which inevitably sound sexist. From here on in, lets assume that I know full well that plenty of women don’t read romance, and some men do. Also, that lots of romance is very well written. This is not about running down romance. It’s just an observation. Having said all of that, I’d like to paraphrase Byron:

Love is to a man a plot apart, ’tis a woman’s entire story

Now for another quick piece of back-tracking: I’ve never actually read a romance novel. Okay, I have, but only if you count classic novels that I was required to read for my English Literature degree – books by authors such as Jane Austen, George Eliot and the Bronte sisters. I’ve not read any modern romance books. Or anything you’d find in the romance section.

Even though I SHOULD read some at least in order to know how they work, why they are so very, very popular and, of course, how to spin a good romantic yarn (even if it’s only for sub-plot purposes).

But to me the whole idea of a ‘romance’ story seems half-baked. Of course you’ve got a love story in there to keep things simmering, but what’s the rest of the book about? Nothing? Really? What, so it’s just people talking about their feelings? Oh, well, I’ll move right along then.

Now, I freely admit I could be wrong about this. I might love those romance novels (pun intended, even if it was a bit obvious). But I have zero enthusiasm for ever giving them a go.

But I’m not much interested in any of them either.

Once again, it’s not because I think they are poor quality or that I’m ‘above’ all of that. It’s simply that those stories still focus mainly on the romance. And that’s not enough.

I suspect a lot of men feel the same way, though I can’t prove it and certainly haven’t been authorised to speak on their behalf.