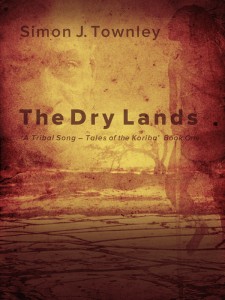 Temfe, a hunter of seventeen years, scoured the savannah searching for prey. The heat of the sun smouldered on his scalp, shorn short of hair. The harsh light glanced off the arid earth and shimmered into mirage and heat mist.

He walked alone, limping as always. The hunters of the tribe could run all day, but the shattered bones in Temfe’s right foot had taught him to remain still, to wait and listen. He had the patience to find prey, but not the speed to close on it. Even working with the others he was too slow, left behind as they followed the fleeing animal.

While hunters chased dust in the distance, Temfe waited and watched. He saw a young eland picking its way through a copse of trees and held his breath, watching intently. The deer was close, the first he’d seen all morning, and the tribe needed this kill. It would keep them alive.

The hunters of the Koriba had caught no meat for five days and the children groaned with hunger. The women complained. The elders grumbled. But the rains didn’t come and the animals were gone.

Temfe gripped his spear. Alone, he’d never get close enough. Surround the beast and strike with stabbing spears, that was the way of the Koriba. The way they had hunted, father and son, back into the days when even the elders were young. And beyond, into unknown time.

Temfe looked for his tribesmen. Almost out of sight the hunters ran as a pack across the grasslands. He waved his spear in the air, urging the others to his side. They stopped. One of them pointed.

Temfe waved again, gestured towards the thicket of thorn bushes, jabbing with his spear.

In the distance, Kofu turned to look, then jutted his chin upwards in scorn. Kofu signalled to the hunters to follow him and set off running towards the escarpment, away from Temfe. Some of the tribesmen paused, knowing Temfe was the chief’s son and they should go to him, by rights, but in the end, they followed Kofu – the hunter, the warrior, the big man.

Only one of the Koriba ignored Kofu. Ngoh trotted to where Temfe stood under the shade of a tree, close to the cover of the bush. Ngoh slowed as he neared and crouched low, staying silent.

Temfe pointed. “Eland. A young one, alone. Go round,” he hissed. He hitched at the deer-skin clothing around his waist, getting ready for action, adjusting the belt made of reed twine.

Temfe kept his eye on the eland, waiting for his friend to be ready. Ngoh readied his spear and ran towards the antelope.

Their short wooden spears were tipped with flint blades, made to stab, not throw, and there was little chance that only two hunters would bring down an eland. But if they could land a blow they might trail the animal until it fell.

Ngoh raised his spear and thrust forward. The eland bounded from cover, heading directly at him, its spiral horns pointed at his chest. He braced himself in the path of the prey. His good foot supported most of his weight, the spear pointed forward at chest height. The antelope was not fully grown, but still heavy enough to charge through Temfe and kill him if he was careless. Temfe would have to stand his ground unwavering to make the beast turn and flee, so he could strike at its flank.

The eland saw Temfe, veered to the right and ran. Temfe lurched forward to strike, but the animal was past him and heading for the open plain.

Ngoh laughed, excited but exhausted. The chance was gone. “Nothing all day,” he said. “Roots and berries again tonight. I’m sick of it.”

Temfe grimaced and hunger squirmed in his stomach. The women never found enough for the whole tribe. Most of the fruit trees were bare, waiting for rains that never came. “Why did they leave?”

“He’s caught nothing for days. Yet they follow him.”

The two friends were the youngest in the hunting party, both in their seventeenth year, but still not treated as equals by the older men. To some of them, Temfe was a nuisance, a cripple who should be left at home.

“They chase dreams,” Temfe said. “I find real prey, but no one listens.”

He heard a shout in the distance. A hunting party, but not from the Koriba. Another tribe was on their lands. He saw them, through the trees. “Tenga,” he said.

The eland charged back towards them, fleeing the new hunters. Temfe and Ngoh exchanged no words, but acted together, instinctively taking up positions that would block and confuse the animal. By making it stop, turn, and stop again the beast lost its advantage of speed. It ran back towards the Tenga hunters who charged through the trees. Temfe struck out, his spear landing a blow on its flank. The animal stuttered but kept running. It panicked, and headed straight into three Tenga, who brought it down.

The hunters shouted in triumph.

“It’s a good thing, after all, that Kofu isn’t here,” Ngoh said.

The leader of the Tenga waved to Temfe, gesturing him forward. “Share the kill,” he said. “You struck the first blow.”

Temfe bowed his head in recognition of the kindness. The Tenga had brought the animal down, and there were many more of them. If they had taken all the food, there would have been little he and Ngoh could do.

His father had welcomed the other tribes onto the lands of the Koriba. “We can’t leave them hungry,” Beru had said. “They are our brothers, our friends.”

That angered Kofu, and the hunters spoke of it bitterly. Let the others starve, save the Koriba, Kofu said, and many listened.

Temfe knelt beside the eland, put his hand on its flank, thanking the antelope for its life, for the food that would sustain his people. The leader of the Tenga joined him in the ritual, stroking the eland’s head to calm the animal in its last moments.

Once the antelope’s spirit had left the body, The Tenga hunters worked with their flint blades, cutting off its hide. “Take a hind leg,” their leader said. “That’s fair.”

Not enough for so many hungry mouths back at camp, but Temfe knew they could ask no more. The Tenga suffered worse than the Koriba. Their lands had turned to desert, their waterholes dry, their prey gone.

As they worked to cut apart the eland, the sun rose towards its highest point, long after the time to be home and out of the heat. They were nearly done when the sound of running feet grew louder. Temfe stood and stared into the distance. The cloud of dust heading their way must be the hunting party of the Koriba, on their way back to camp.

“What’s wrong?” The leader of the Tenga handed a hind leg to Temfe. “They’re your people.”

Temfe wanted to warn the Tenga. But his father had told him never to speak against his own tribe. He would hold his tongue.

The Koriba slowed as they neared the fallen eland. Kofu strode up to Temfe, towering over him. He took hold of the eland leg, yanked it from Temfe’s grip, and handed it to one of his men.

“Why are Tenga on our land?” Kofu said.

“The land is for all,” the Tenga leader said.

“We hunt here. You steal our food, make our children hungry.” Kofu made a stabbing motion with his spear towards the man’s heart, stopping the flint blade a hair’s breadth from breaking the skin. The Tenga warrior didn’t flinch, but behind him his tribesmen readied their spears, ready to fight if they must.

Kofu longed for war, he spoke of it often, desiring to drive the other tribes away. There were too many people, Kofu said, too many others.

“The Tenga are friends.” Temfe held up a hand to the Koriba hunters, gesturing for them to stay back.

The men of the Koriba wavered, but Kofu glared spears of hate at Temfe, his shoulders tensed as if about to strike. But he walked past, too close, forcing Temfe to stand aside. Kofu approached the Tenga, but they stood firm, protecting their prey.

“If you hunt on our land, you Tenga will die.” Kofu shouted the words, as if a war cry. “If you take our water, if you take our prey. Be warned.” He shook his spear and the tribesmen of the Koriba chanted his name. “Kofu,” they cried, “Kofu, Kofu.”

The man himself turned and walked off, but he muttered at Temfe as he passed. “You’ll never lead us.” His mouth snarled with scorn. Kofu kept walking.

Temfe stood his ground, but his legs shook. He was not afraid, not of anything, not even Kofu. It was anger that boiled inside him, knowing he was helpless against the bigger man.

Kofu strode off, leaving the eland and the Tenga, never looking back, his spear held high.

The leader of the Tenga leant close to Temfe. “Bad for you,” he said, “bad for all, if this one leads the Koriba.” He shouted to his men, who took up the carcass of the eland and carried it off back into the woods,  heading towards their homeland.

Temfe watched Kofu and his warriors lope across the hunting grounds. Was Kofu ready for war? He had held his hand, this time, but not for much longer. Hunger would make the men fight, soon enough. Kofu would start his war when it suited him, and these parched lands starved of rain would be watered with the blood of the Tenga and the Koriba.

Print or ebook on Amazon

In iTunes for Apple devices

And available through Smashwords.