My crime thriller  ‘Blood Read (Publish And Be Dead)’ is close to being ready for publication. The book is the first in a series following the misadventures and mishaps of investigative reporter Tom Capgras and his family.

The book will be published this summer / autumn. In the meantime here’s the short version of the blurb and the first chapter of the novel: 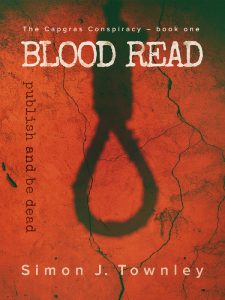 When investigative journalist Tom Capgras finds his literary agent hanging from an oak beam in her West End office, an immaculately tied noose around her neck, his dreams of a non-fiction book deal appear dead in the water.

Bad day for him, worse for her.

Joanne Leatherby’s death looks like suicide but Capgras suspects murder. Nonsense, say police, who dismiss him as a conspiracy crackpot.

At Joanne’s funeral Tom meets a fellow writer, the alluring, mysterious Kiera Roche who shares his suspicions. Together they investigate and uncover links to a string of untimely deaths  – editors, publishers, reviewers, even book bloggers, killed for an unkind word.

Blood on the Covers, Death in the Margins

The evidence points to one man – a mid -list author of detective tales with a career on the skids. Cast adrift by agents and publishers alike, his dreams thwarted, Arthur Middleton has gone over to the dark side and embraced self-publishing. What Kiera says may be true – that “ambition makes monsters of us all” – but how mad would a man have to be to kill for publicity, for book sales? Mad enough to admit everything on the pages of his latest blockbuster?

As the body count mounts, and the police still refuse to take him seriously, Capgras must act alone, defy the odds and get to the truth fast – before the killer gets to him.

A crime thriller with a twist of satire – in the vein of Le Carré and Leonard, with a nod to Kurt Vonnegut, Jasper Fforde and Tom Robbins. The first book in the genre crossover series The Capgras Conspiracy.

Blood Read (Publish and Be Dead)

Chapter One: The Gatekeeper

Doors never opened easily for Tom Capgras. The gatekeepers, those at the helm of life, know a trouble maker when they see one and at every turn they blocked his way.

Yet here stood an unlocked door, an inch ajar. He tapped lightly. “Jo? It’s Tom.” No answer came, only a rasping creak – an echo of summer days at the dockside, water lapping against boats, the screech of gulls and the moan of rope on wood.

Rope. That was it.

He pushed at the handle and edged into the office where Joanne Leatherby, literary agent, waited patiently for their meeting to begin. He noticed her feet first, twisting and turning above the waste paper basket. A Series 7 Arne Jacobson chair had been kicked onto its side. The desk was clear apart from a pile of papers in the centre. Tom recognised the tattered edges of his own manuscript where his printer had mangled the pages. He had been meaning to replace it for longer than he could remember. Joanne had told him it looked unprofessional.

She was beyond caring now, her face white and bloodless, her eyes staring, mouth contorted in pain. Tom yelled for help, his voice muffled as if underwater or heard through thick glass. Cut her down. Check her breathing. His foot collided with the bin and it rolled across the room.

The rope had been secured to a solid wooden desk and thrown over an oak beam. The knot wouldn’t move. What fiend devised this? Joanne didn’t seem the type for the boy scouts. Finally, it unravelled. Her body hit the carpet with a thud and he winced at the impact, though she could feel no hurt, not any more.

As he loosened the noose from her thin, white neck, he noticed how expertly the hangman’s knot had been tied, the work of a perfectionist intent on making an immaculate death.

He fumbled in the pocket of his Belstaff jacket to find his phone. Who to call? The newsdesk? The thought flashed across his mind and he shook it away. Ambulance. But that meant police…

No one knew he was here. No one had seen him on the stairs. Only that cleaning woman with her face half hidden by a shawl. She’d held the door open but she’d not even looked at him. He could slip out, let someone else deal with the coppers. The interviews. The questions. The doubt.

He put a hand on Joanne’s forehead as if to comfort her. Why now, he asked, what could hurt so bad? She remained impassive, silent. And dead. Another suicide. Add her to the list.

He’d not known her long, or well, but she had appeared content. Strong, even. He’d sensed no demons tormenting her, and he was a man who knew much about such things.

He’d have to make the call. He owed her that, at least. Besides, he’d undone the rope, lowered the body. His DNA was here. Don’t be a fool. Nothing to hide. He dialled on his iPhone, asked for an ambulance, gave details, his own name, Joanne’s. The police controller cut in asking if there were signs of a break-in, anything suspicious. Tom’s eyes scanned the room. Where was her laptop? Her leather shoulder bag lay sprawled on the floor. There were details out of place, or things that shouldn’t be here, he felt it in his bones. One drawer of a filing cabinet stood open, files lumped on top. A pile of books had been scattered on the floor as though pulled from the bookcase at random. Detective tales by the look of them. A mug lay beside a wet patch on the carpet where the coffee must have spilled. “There’s something wrong.” He dreaded what must come. More police, more questions. No escape. “It’s not suicide. Made to look like it. But it’s wrong.”

“What is your relationship with the deceased?”

“You found the body? Is there no one else there?”

“The door was open. I let myself in.”

The policeman waited for an explanation. The heartbeat of silence hung heavy on the phone.

Think. How did it happen? “The outside door at street level wasn’t shut properly. The lock was stiff. It was resting open. I tried the buzzer but there was no answer. Joanne’s expecting me, I’m here for a meeting. We’re off to see a publisher, so I assumed no one would mind. There’s another door, at the top of the stairs. As I got to it there was a woman leaving. A cleaning lady I guess.”

“Can you describe her?”

“I don’t know, east European maybe? Wearing a shawl. Lots of colours. And patterns. And a coat. Big coat for the time of year, long. Heavy. Didn’t see her face.”

“You’re sure there’s no one else there?”

“No one on reception. I’ve been shouting but no one’s come.”

“An officer will be there soon. Please wait, Mr Capgras. We can contact you on this number?”

Had they looked up his name yet? Had it flashed warnings and previous convictions? Did they even now have his GCHQ file open on their computer screens?

He hung up, mid-question, and stared at the phone. His instincts nagged at him to file copy. He’d have done it too, but a death such as this, looking all the world like suicide, would make no more than a snippet in the ‘Books’ section, at best.

He slid the phone into a front pocket of his black jeans, knelt down and put a hand on Joanne’s cold cheek. A hope appeared, and he reached for her bag, found a make-up mirror and held it to her mouth, longing for signs of life. No mist or condensation formed. She’d not breathe again.

His eyes scanned the room. If this was murder he should look for clues but there was little here other than  books: stacked against the walls; scattered across the floor; in piles under the desk. Even one in the wastepaper basket that lay on its side on the carpet. He must have kicked it over while scrambling to get her down. He stretched out and picked up the hardback, examined the cover with its photos of a revolver, a yacht and a glass of whisky: ‘Vex Not His Ghost’, an Inspector Lear mystery by Arthur Middleton.

Standard genre stuff. He avoided crime tales – he saw too much of the real thing. And coppers were rarely heroes, in his experience. He opened the book, a signed copy. “For Joanne,” read the inscription. “We two alone will sing. Many thanks. Arthur.”

He tossed it back into the waste bin and turned to Joanne, staring into her pale face. What pain had driven her to suicide? A fatal illness? A divorce? The lies of a lover? He wouldn’t believe it. She wasn’t the type. Who tied that noose, so neat, so tight? Not these fair hands, he was sure of that.

Whatever had happened here, it didn’t look good for his own dreams. Doors had never opened easily for Tom Capgras – life’s gatekeepers know a trouble-maker when they see one. But Joanne had believed in him – a book that mattered, she said, telling hard truths. It needed someone like her to fight its corner. A book that might lift his career, or save it, or redeem it. Or at least make money. Or waves. Or something. Not any more.

He knelt beside Joanne, clutching her cold fingers, thoughts running on full throttle. Why did nobody come? Finally, five stories below, the door to the street opened, shut again, to be followed by footsteps on the stairs. But not police, or ambulance –  they were too light for that. One person, female, clomping in office shoes. He let go of Joanne’s hand, placed it on her chest and lurched to his feet, ready to defend the doorway.