Time slowed. The weight of the world was on his shoulders. Relativity had kicked in.
Vitas Rodriguez accelerated past the Russian midfielders into open space. Seconds to go before time was up and the lottery was drawn. A penalty shoot out to decide the World Cup final. 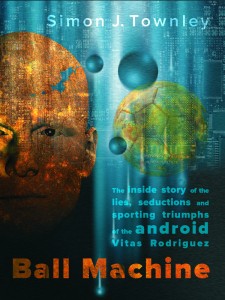 Vitas watched Alonso jink past a defender. The young winger lifted the ball over the Russian goalkeeper with a flick of his foot. As he hurdled the goalie, Alonso’s feet flailed in the air.
The final minute of injury time, an empty goal. The world held its breath. It all came down to this. Alonso must score.
Vitas heard a cry from the side-lines, a woman’s voice cut through the noise. Was it her? Did she call his name?
In front of him, Vitas saw Alonso stumble. The winger stuck out a boot, and the ball flew towards the open goal. Alonso must score.
Vitas kept running. Instinct. Get there, be there, pull Alonso to his feet, hold his hand high in triumph. It would be all right, the world would understand, forgive them in the end, if the winner came from flesh and blood, skin and bone. Alonso was the hero. Alonso must score.
Vitas sensed time kick and lurch as if its engine tugged against a hand brake. He noticed the sharp taste of metal in his mouth as the ball hit the post.
It rebounded back across the penalty area and rolled towards him. All he had to do was kick it.
At that moment, time stopped.
One second it was there, then… gone.
In the dug-out, a gangster held a gun to Rosa’s head.
Pete had vaporised, living on the proceeds, staying hidden.
In the stands, a billionaire had Natalya twisted around his fingers. The woman who would never love him.
In a forest monastery in the Thai mountains, a group of monks leapt to their feet, screamed at the borrowed television and howled for liberation.
Time hung motionless as eighty thousand people watched, transfixed. Around the world, billions of pairs of eyes focused on Vitas, urging the underdog to victory while praying he would fail.
Time stopped. None of this mattered, not the glory, the billions of dollars, or the economies of entire nations decided by a single step. Or stumble. Or kick.
History in the making, his future in the balance.
Time flashed before his eyes. All illusion.
How did it come to this?

‘Build Me a Ball Machine’
The Dry Lands – Chapter five